History Of Prince of Peace 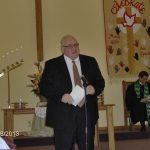 The Service of Organization was held on Sunday, April 14, 1985 at the Violet Grange Hall under the Organizing Pastor Reverend L.Dudley Field. The first meeting was held in the little white house at 895 Diley Road. An overflowing worshipping community  required the immediate relocation to the Grange Hall where worship was held until the church was built in 1988. The original membership wheel signed by 99 members is proudly displayed in the Narthex. 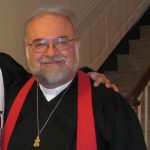 Rev. Myers started at Prince of Peace in January 2001 and was installed in April of that year. During his 12 years at Prince of Peace Pastor Jeff helped us focus on mission work both in the community, in surrounding states and around the world. With Pastor Jeff's assistance our mission trips grew to yearly assistance to areas of West Virginia and Kentucky. Locally we formed the POP ARTS outreach as an area local artists could teach their crafts at a nominal cost. Jeff also was an important role in the revamping of the local food pantry, including the involvement of the Pickerington Christian Ministerial Association (PCMA) and relocation of the Pantry. Jeff retired in 2012 and he and his wife Sue moved to HH.SC, but retirement has not slowed them down. Pastor Jeff continues to serve as pulpit supply and interim minister. 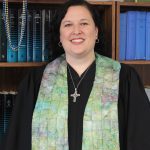